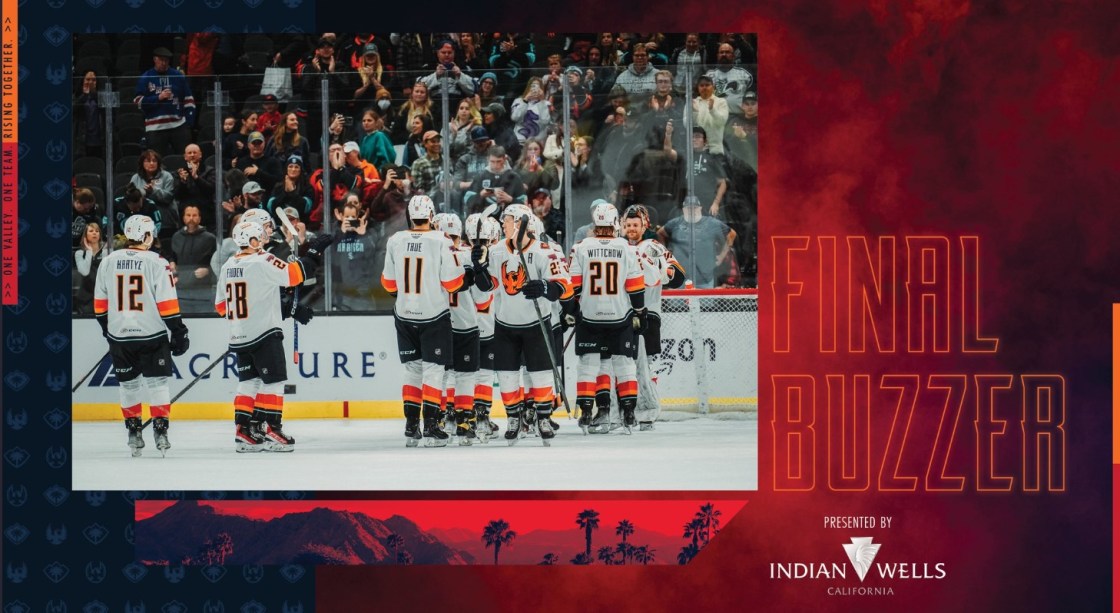 (CNS) – Callum Booth stopped all 19 shots he faced in relief of Christopher Gibson and had an assist as the Coachella Valley Firebirds defeated the Abbotsford Canucks, 7-4, Sunday evening in Seattle.

Booth and Gibson both made their debuts with the Firebirds Sunday. Joey Daccord was recalled by the Firebirds’ NHL parent team, the Seattle Kraken, earlier Sunday after playing each of their first three games.

Poganski scored an empty-net goal with four seconds left in the third period in front of a crowd announced at 8,724 Climate Pledge Arena, the Kraken’s home arena.

Firebirds defenseman Jimmy Schuldt opened the scoring 31 seconds into the game. Tye Kartye and Carsen Twarynski also scored for the Firebirds in the first period, which ended in a 3-3 tie.

Abbotsford (2-2-0-0) scored on three of its eight first-period shots against Gibson, who has played 16 games in the NHL, including two with the Tampa Bay Lightning in the 2020-21 season. Yushiroh Hirano scored on a power- play goal at 3:01, Christian Wolanin an even-strength goal at 7:01 and Danila Klimovich a power-play goal at 12:51.

Arturs Silovs (2-1-0-0) made 21 for the Canucks, the Vancouver Canucks’ American Hockey League affiliate.

A @Firebirds GOAL in the first minute!

Sunday Funday is off to a hot start 🔥 pic.twitter.com/qbjZXzVopk