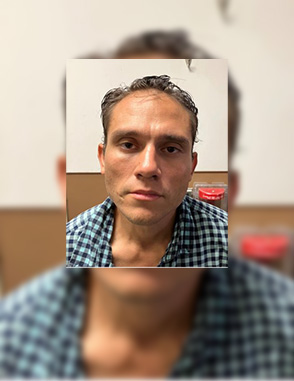 (CNS) – A 34-year-old man was behind bars Thursday for allegedly striking multiple vehicles while leading officers on a vehicle pursuit from Indio to Thermal.

John Anthony Aispuro Jr. of Indio was arrested Thursday afternoon on suspicion of attempted assault on a peace officer, evading arrest and violation of a protection order, according to Ben Guitron from the Indio Police Department.

Guitron said that at around noon Thursday, officers responded to the 83-300 block of Corte Presidente in Indio to a report of a man violating his domestic violence-related temporary restraining order.

When officers arrived, Aispuro allegedly fled from the scene in a red Honda Civic coupe, which was later spotted near Jackson Street and Genoa Gate, according to Guitron. Officers attempted to pull the vehicle over, but he allegedly hit an Indio Police Department vehicle before leading a pursuit toward Coachella.

It’s alleged that Aispuro hit an additional police vehicle before being arrested near Avenue 66 in and Jackson in Thermal, Guitron said.

He was arrested and booked into the John J. Benoit Detention Center, where he was being held on $100,000 bail.