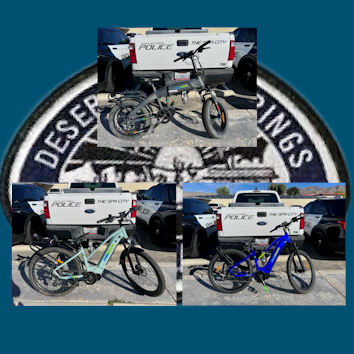 (CNS) – Three men were arrested Monday for allegedly stealing electric bicycles and being in possession of firearms.

Lu Qu Won Briddell, 28, was also arrested with the two on suspicion of violating his parole, Saucier said.

About 7:15 a.m. Monday, officers responded to the 66700 block of Desert View Avenue to a report of several suspicious subjects on bicycles, according to Saucier.

They were both arrested along with a third suspect in the vehicle, according to Saucier.

Saucier added that they were also allegedly in possession of loaded handguns, ammunition, stolen electronics and other contraband.

All three suspects were booked into the John J. Benoit Detention Center in Indio.

Hernandez and Lu Quwon were being held without bail. Locke was being held on $50,000 bail.