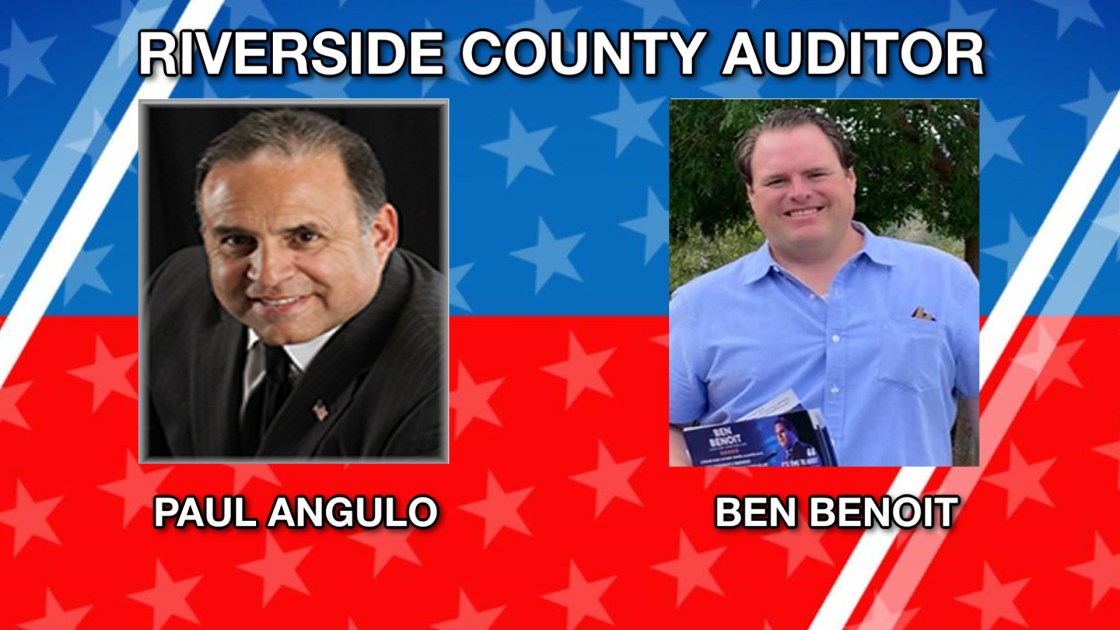 (CNS) – Riverside County voters will have an opportunity Tuesday to decide who they want tracking the flow of money in county government going forward when they cast ballots for the next auditor-controller.

Three-term incumbent Paul Angulo is squaring off with Wildomar Mayor Ben Benoit in the Nov. 8 election, following a tight primary race in June.

It is the first time Angulo has faced a challenge since he was first elected to the office in 2010.

“As a highly trained professional, I bring integrity, experience and professionalism to the position,” Angulo said in a campaign statement. “I do not beg for campaign money to avoid corrupt practices or seek `endorsements’ from those I will audit, as I believe that to be an inappropriate conflict of interest. I am uniquely qualified to be your county auditor.”

Benoit has served on the Wildomar City Council for over a decade, while continuing to work in the private sector in a public relations capacity. The son of the late county supervisor and former state lawmaker John Benoit, for whom the Indio jail is named, the challenger has resided in the county all his life, serving on a variety of boards and councils.

“I’m the auditor for a nonprofit organization, and I serve on auditing committees for several government agencies,” he said in a campaign statement. “I’ve balanced budgets, improved government efficiency and increased transparency and accountability in local government.”

Benoit cited a county grand jury report from May as one of the vulnerabilities of the incumbent. The report indicated that the Office of the Auditor-Controller could benefit from additional oversight, including relying on a committee composed of individuals appointed by the Board of Supervisors, Executive Office and private sector — in other words, a watchdog keeping an eye on the watchdog.

Angulo replied that the idea was an absurd overreach, “straight out of the Communist Manifesto.”

The U.S. Army veteran assumed an uncharacteristic posture during a board meeting last month, when he was asked by the supervisors to summarize findings from a report by the Office of the Auditor-Controller concerning skyrocketing overtime expenses in multiple agencies during the fiscal year ending June 30, 2022.

Angulo used the occasion to suggest Benoit had a soft work ethic, asking board members, “have you ever looked at his hands?” and conveying that the challenger wouldn’t be suited to scrutinizing $7.5 billion in county government finances.

The incumbent is a longtime certified public accountant; Benoit is not a CPA.

According to Angulo, he has authored “over 300 county audits exposing waste and abuse” and ensured the dispersal of funds to municipalities and school districts by way of the county.

Benoit has touted his vast field of endorsements, including all the county supervisors, as an indication of the confidence that fellow public officials place in him.