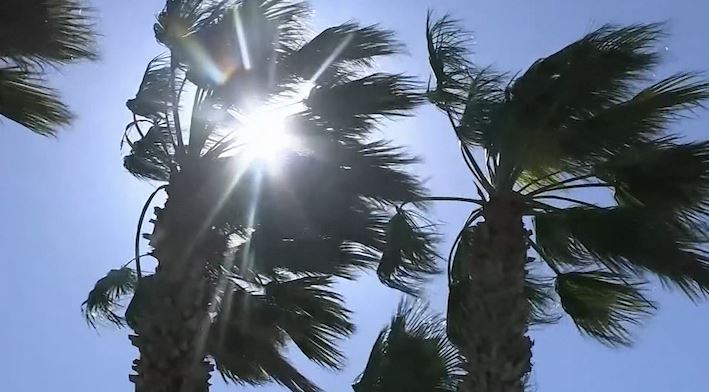 The Santa Ana winds are back.

With it comes dangerous driving conditions, especially for truckers.

“It makes you nervous,” Trucker Michael Minor shared. “You don’t get scared, you get cautious. Being scared will get people hurt.”

Minor shared how it feels behind the wheel of a big rig, especially when driving on windy highways like I-10.

“The wind takes it even worse,” Minor continued. “Can’t hold the truck in a straight line. It’s hard to keep it in between the lines when it’s windy. You just go slower. That’s all you can do is just calm your speed down and get there in one piece instead of scattered all over the interstate.”

And these wind storms bring something else: dust.

“Many times there’s going to be a lot of coughing because of the particles, the dust and even recently, they are reseeding the grass. So those seeds, that new grass, the dirt is going to be in that wind,” Coordinator of Pulmonary Rehabilitation at Desert Regional Medical Center, Tina Louise, said. “A lot of coughing is going to happen now, also wheezing that then could lead to additional phlegm and then respiratory difficulties.”

On top of that, fire danger skyrockets.

“What’s going to happen this time is the Santa Ana winds are going to come in, they’re going to start drying out all that vegetation again, and it’s going to be like it never rained,” CAL FIRE/Riverside County Fire Department Public Information Officer Richard Cordova explained. “So we get another set of Santa Ana winds and those are the ones I’m really worried about, because now everything’s dried out.”

With all this in mind, there are ways to prepare for the road, prevent respiratory issues and fire.

“It takes us a long time to stop. We’re heavy. They divert in and out of us,” Minor continued. “That’s dealing with a bad deck of cards right there.”

“Stay home,” Louise said. “The other thing is to have their inhalers if they’re already prescribed an inhaler. Keep that with them. The other very important point is to take their medications on schedule. So if they use a breathing treatment, or they have the powdered inhalers, use those as scheduled. Don’t skip it.”

“What starts these fires is everything that people put against their homes, or what the wind pushes against their home,” Cordova explained. “So that patio furniture, your trash cans, those things will ignite from flying embers anywhere between a mile to two miles away. We’re asking you to either take that furniture, or take material away from your homes, so that way it doesn’t have the opportunity to ignite your homes.”

The wind advisory is scheduled to end later this evening and another round of winds are expected to come later this week.