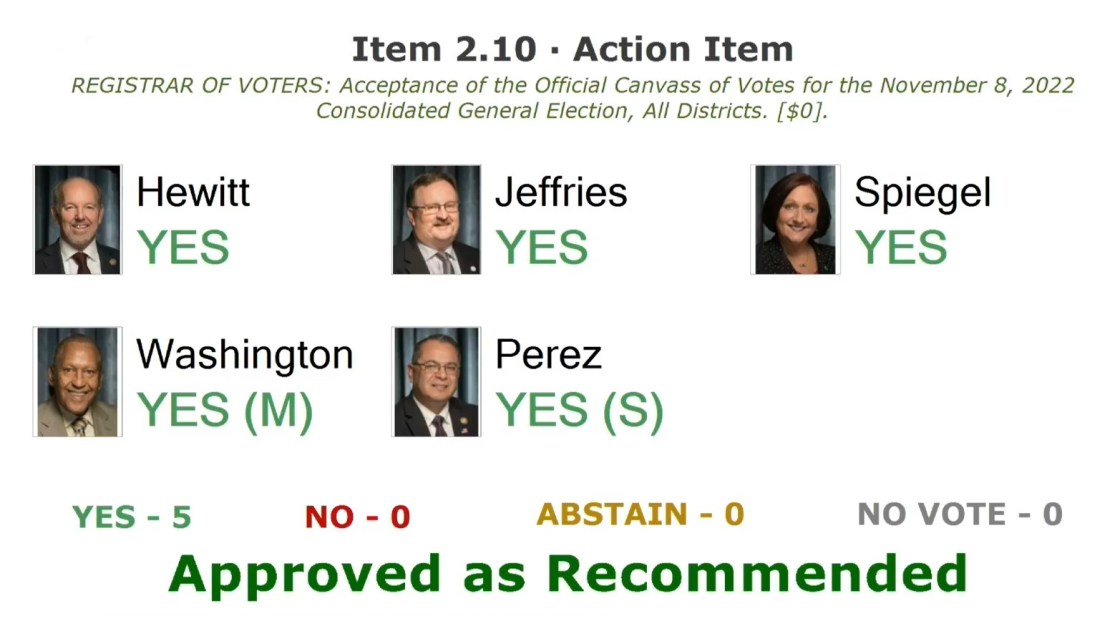 (CNS) – The Board of Supervisors Tuesday signed off on the final vote canvass from the Nov. 8 election submitted by Riverside County Registrar of Voters Rebecca Spencer, affirming the results, though a few supervisors pointed to problems that need to be addressed going forward.

Supervisor Karen Spiegel took issue with the Executive Office’s use of the terms “successfully held” in reference to the election and the vote certification presented to the board.

“There were some challenges,” Spiegel said. “We want to ensure everyone that we’re going to work on this.”

Spiegel and Supervisor Manuel Perez serve on the board’s Ad-Hoc Election Integrity Committee, which meets periodically and is planning to further evaluate hang-ups or fails from the general election.

One of Spiegel’s dislikes was the fact that English- and Spanish- language voter information guides did not go out simultaneously, with the latter pamphlets delayed.

“To me, they should go out together,” she said.

The supervisor also questioned why the vote counts from Wildomar and Menifee were processed behind other tabulations, with the lags resulting in abrupt changes in the “whole results for the candidates.”

“We are taking it seriously,” Spiegel said. “Some things might be because of state guidelines, but how can we do better with those guidelines? We’re really looking at how to improve the process.”

Perez agreed that the voter information guides should go out early and together, regardless of the language in which they’re printed. He additionally pointed out that the Latino community relies heavily on radio to obtain information, so that medium should not be overlooked in disseminating information.

“A lot of people are listening to radio throughout the day,” he said. “The more we can use radio, the better.”

Supervisor Kevin Jeffries characterized the election cycle as “messy” because of delays in distributing pamphlets and vote-by-mail ballots and tabulating results in a timely manner.

“We’re always running into challenges. It never goes as smoothly as it could,” he said. “We need to make sure our employees are supported … and get the results — the accurate results — out when we can.”

There were no complaints regarding potential defects in the more than 1,000 touchscreen electronic voting machines placed at in-person vote centers countywide. However, earlier this year, a group of residents, joined by Temecula City Councilwoman Jessica Alexander, called for the board to stop using Dominion Voting Systems Inc.

Dominion’s programs came under scrutiny and criticism following alleged irregularities in swing states during the 2020 presidential election. The county most recently entered into software license and systems use agreements with the company in 2019.

As part of a board block motion Tuesday, the supervisors unanimously approved an extension of the county’s contract with Dominion to July 2029, at a prospective aggregate cost of $14.96 million.

Spencer told City News Service in May that Dominion’s products have been rigorously vetted and met certification criteria.

According to Spiegel, the recently formed Election Advisory Committee will be providing recommendations to the board’s ad-hoc committee, aiding in the process of improving election operations.

The seven-member panel is slated to meet twice in 2023.

Spiegel asked any resident with election-related concerns to reach out to her or Perez’s office to submit details that the ad-hoc committee can use in its review of the Nov. 8 election.