Board of Supervisors Appoints New Clerk, Bids Farewell to Outgoing One 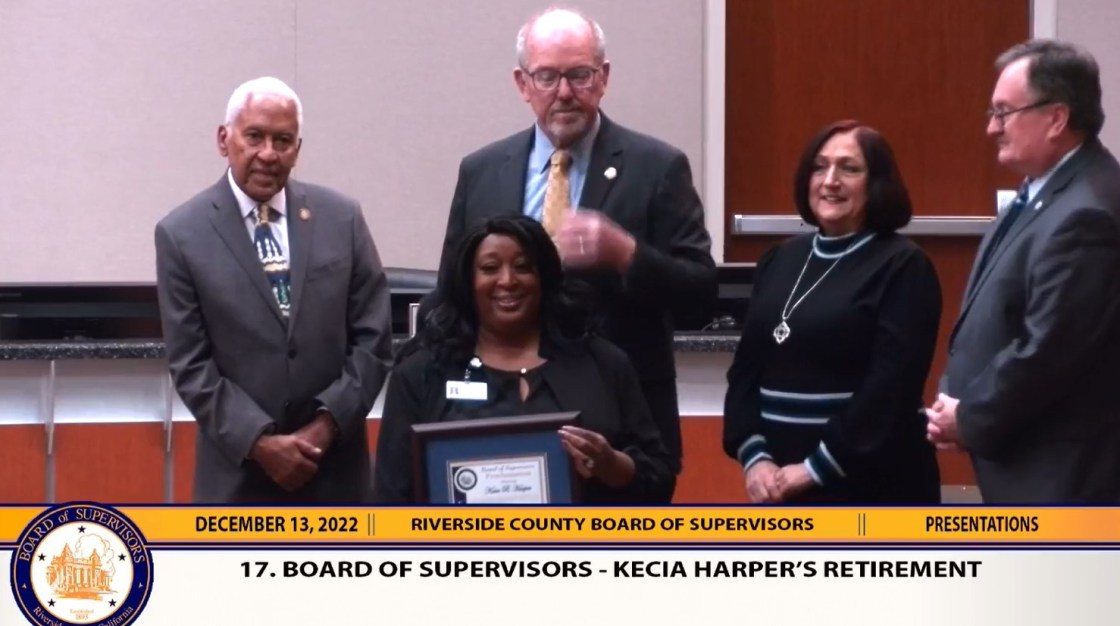 (CNS) – The Riverside County Board of Supervisors Tuesday appointed a new clerk of the board, bidding farewell to the veteran county employee who has served in the position for more than a decade and will retire at the end of this month.

“Thank you to my board. Thank you to previous board members,” Clerk of the Board Kecia Harper said as the supervisors bid her farewell in a public ceremony near the outset of Tuesday’s meeting. “I’m blessed beyond measure. Thirty-six years (working for the county) is a long time. Relationship is everything.”

In a 5-0 vote, the board appointed the assistant clerk of the board, Kimberly Rector, to take over the top spot.

“You have been very helpful to direct me,” Supervisor Karen Spiegel told Harper. “You have been a big part of Riverside County. I know that Kimberly is going to do a great job. I’m confident she’ll be fine.”

“She heard that I was going to be chair next year and decided to retire,” the supervisor said to laughs. “You have always been friendly. Great sense of humor, though occasionally wicked. I’ve enjoyed working with you.”

Harper was appointed to the position in 2009 after then-Clerk of the Board Nancy Romero retired.

According to the Executive Office, Harper staffed “over 600 public board, commission and committee hearings” during her time as clerk.

The clerk’s office is responsible for compiling and publishing agendas for meetings, providing guidance to board members in setting parameters for public hearings, managing requests from the public to communicate to the board, responding to records requests and other duties.

Rector has been assistant clerk, serving alongside Harper, since 2009. According to the Executive Office, she has been employed by the county since 1988, gradually ascending the administrative ladder, becoming a records manager prior to transitioning into the assistant chief clerical position. She holds a master’s degree in business administration.