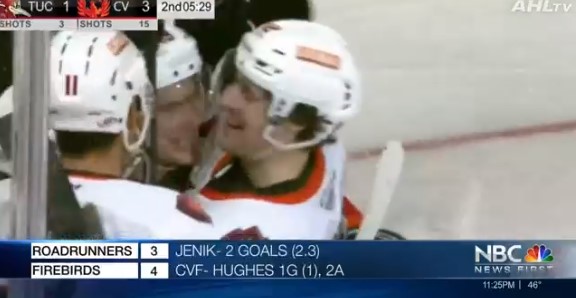 (CNS) – Cameron Hughes scored the first goal at Acrisure Arena and assisted on two others as the Coachella Valley Firebirds built a three-goal lead and hung on for a 4-3 victory over the Tucson Roadrunners Sunday evening.

Jesper Froden and Tye Kartye both had a goal and an assist for the Firebirds (15-5-3-0) in front of a crowd announced at 10,087, 13 short of the arena’s listed capacity for hockey.

Hughes put a slap shot from the right faceoff circle past Jon Gillies for a power-play goal eight minutes, 49 seconds into the first period for his second goal in 13 games with the Firebirds and first since Nov. 24.

Roadrunners coach Steve Potvin first pulled Gillies for a sixth attacker with 3:28 to play. Jan Jenik put in a rebound of Michael Carcone’s shot with 1:45 left for his second goal of the game, a day after he was scoreless in 3:59 in eight shifts for Tucson’s NHL parent team, the Arizona Coyotes, in a 5-2 loss to the Buffalo Sabres in Tempe, Arizona, his first NHL game of the season and 16th of his career.

Gillies returned to the net immediately after the goal but was pulled again with 1:17 left. Joey Daccord stopped shots by Jenik and Nathan Smith in the final 19 seconds to preserve the lead.

The Firebirds killed all six of Tucson’s power-play opportunities and scored on three of their five, including John Hayden’s goal at 5:49 of the second period.

The Firebirds led 21-18 in shots, including a 16-5 advantage through two periods. Daccord (9-3-1) made 15 saves in his sixth victory in his last seven appearances for the Seattle Kraken’s American Hockey League affiliate.

Gillies (4-5-2) made 17 saves in his second loss to the Firebirds in five days. He allowed four goals, including three in the third period, in a 4-3 loss Wednesday in Tucson, Arizona.

The Firebirds are 4-1-0-0 against the Roadrunners. The teams will meet for the fourth time in eight days Tuesday at Acrisure Arena.

The Firebirds played 22 games in five states and two Canadian provinces over two months as construction of Acrisure Arena was being completed.