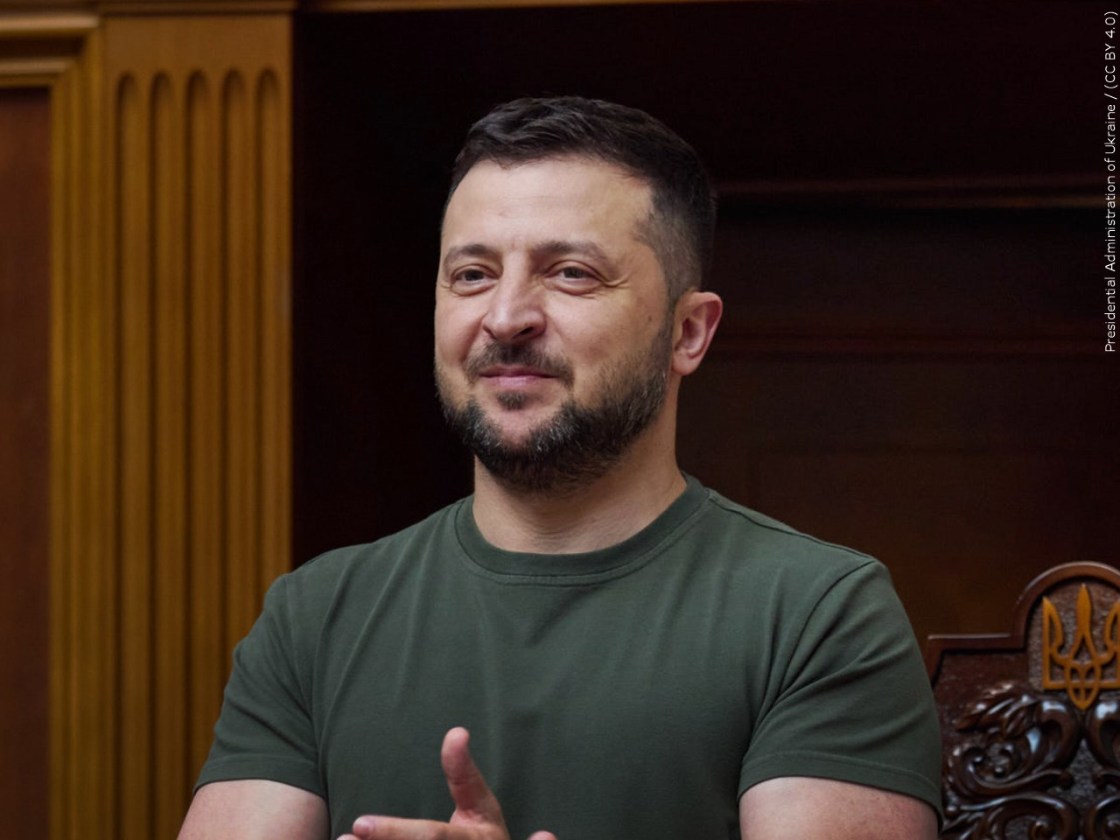 (CNN) — US President Joe Biden and Ukrainian President Volodymyr Zelensky displayed a united front on their approach to Russia’s ongoing war in Ukraine as Zelensky makes a dramatic visit to the United States.

“I think … we share the exact same vision, and that a free, independent, prosperous and secure Ukraine is the vision — we both want this war to end,” Biden told reporters in the White Hous’se East Room.

Zelensky — embarking on his first trip outside his homeland since it was invaded 300 days ago — arrived in Washington on Wednesday, where he met with Biden in the Oval Office for lengthy discussions about a path forward in Ukraine and subsequently held a joint news conference at the White House.

The visit came as the Biden administration announced it is sending nearly $2 billion in additional security assistance to Ukraine, including a sophisticated new air defense system.

At the start of the news conference, Biden relayed that he felt it was “particularly meaningful” to speak to Zelensky in person and “look each other in the eye.” The Ukrainian president’s leadership, Biden said, has inspired the world.

“We understand in our bones that Ukraine’s fight is part of something much bigger,” Biden continued.

Biden said Zelensky has shown his “strong stand against aggression in the face of the imperial appetites of autocrats,” and said the US was standing alongside Ukraine in maintaining “core principles of sovereignty and territorial integrity.”

During the news conference, Biden told CNN’s Phil Mattingly that the missile system — called the Patriot system — is defensive, not escalatory. Zelensky said the system is “something that will strengthen our air defense significantly.”

“Every dollar of this investment for the United States is going to be a strengthening of global security and I know that the American leadership will be strong and will play important role in global scope,” Zelensky added. He also suggested Ukraine would want more of the systems.

Both Biden and Zelensky addressed the Russians during the news conference, with the Ukranian president repeatedly calling Russian forces of “terrorists” and Biden underscoring the importance of being “clear” about Russia’s actions.

“It is purposely attacking Ukraine critical infrastructure, destroying the system to provide heat and light (to) Ukrainian people during the coldest, darkest part of the year. Russia is using winter as a weapon, freezing people, starving people, cutting them off from one another,” Biden said.

The war, Biden later said, “could end today if Putin had any dignity at all and did the right thing and just … pulled out. But that’s not gonna happen.”

The trip, which US and Ukrainian officials arranged in secret over the past week, came with heavy risks. After arriving in Poland by train, Zelensky flew to Washington aboard an American military aircraft, US officials said. He arrived in the US shortly after midday at Joint Base Andrews, just outside the nation’s capital.

Zelensky arrived to the South Lawn just after 2 p.m. ET, eschewing a suit for his now-familiar military green shirt. A military honor guard lined the White House driveway as his black vehicle pulled toward the building.

“I understand that we have very important topics and we’ll discuss them, everything, so many challenges in Ukraine, in Europe, in the world, from energy to the situation on the battlefield,” Zelensky said in the Oval Office. “But first of all, really, all my appreciations from my heart, from the heart of Ukrainians, all Ukrainians, from our nation.”

The visit by the Ukrainian leader to Washington, expected to last only a matter of hours, amounts to a remarkable moment 10 months since Russia’s war in Ukraine began.

Pulled together quickly by American and Ukrainian officials over the past 10 days, the wartime visit was meant to demonstrate in stirring fashion the continued American commitment to Ukraine at a moment when Biden’s ability to maintain that support at home and abroad is being tested.

It has also been an opportunity for Biden and top American officials to sound out Zelensky on how he views the trajectory of the conflict, and to offer their thoughts on what it would take to bring the war to an end.

“Together with our partners, we’re also going to impose costs on the Kremlin and will support Ukraine in pursuing a just peace,” Biden said in the Oval Office, a reference to how Zelensky has said he hopes to see the war end. “President Zelensky, the United States stands with the brave people in Ukraine.”

Sitting before a roaring fireplace, Zelensky offered Biden a military cross medal from a Ukrainian soldier serving on the front lines.

“He said, ‘Give it to a very brave president,'” Zelensky said.

“Undeserved but much appreciated,” Biden replied as he accepted the medal, asking if it would be possible to contact the Ukrainian soldier.

Biden first discussed the prospect of Zelensky visiting Washington during a telephone call with the Ukrainian leader on December 11, an administration official said. A formal invitation was extended a week ago that Zelensky accepted, launching joint consultations on the security parameters of the risky, highly secretive trip.

Zelensky, who the official said was “very keen” to visit the US, determined those parameters met his needs, and the US set to work executing them. The trip was finally confirmed on Sunday.

“We are working in lockstep with him and his staff to make sure we can make this trip safely, both coming to the United States and coming back. We will continue to support his travel requirements as best we can,” said John Kirby, the strategic communications coordinator at the National Security Council.

Zelensky traveled to Poland by train as part of his journey to the United States on Wednesday. Video by CNN affiliate TVN in Poland captured the moment Zelensky arrived by train in Przemysl, near the Polish/Ukrainian border. Zelensky was then seen in a white 4×4 vehicle waiting to depart in a convoy.

Tight security has been enforced around Zelensky’s visit amid concerns that Russia wants to incapacitate the Ukrainian president, a source close to the Ukrainian leader told CNN on Wednesday. Because of this ongoing threat, senior top government officials — as well as embassy staff in the US — were not informed about the schedule of the visit.

According to the source, the military risk had to be calculated allowing the Ukrainian president to make the short overseas trip without jeopardizing the military situation. Scheduling also had to be worked with the White House to assess availability for this to happen.

In weighing a visit, Zelensky suggested he did not want to travel had there not been a significant development in the bilateral relationship between Ukraine and the US. Zelensky viewed the US decision to send Patriot missile defense systems to Ukraine as a major shift in the relationship between the two allies.

Over the course of the 10-month invasion, Zelensky has emerged as the international personification of Ukrainian resistance and has spent much of the year appealing to nations for support. He has remained inside his country for the duration of the war, a reflection both of his desire to rally alongside his besieged country and the precarious security situation he would face outside Ukraine.

As the war nears its one-year anniversary, however, international support for Ukraine is being tested. Sanctions on Moscow have contributed to higher energy prices, particularly in Europe, which is heavily reliant on Russian oil and gas. Biden, however, told reporters on Wednesday that he’s not concerned about maintaining unity in NATO and the European Union’s support for Ukraine.

And within the United States, Republicans who are poised to take control of the House of Representatives have signaled they won’t quickly approve massive new assistance packages for Ukraine.

On the battlefield, Ukraine has retaken key cities and shown unlikely resistance to an unprepared and ill-equipped Russian army. But Russian President Vladimir Putin has shown no indication he plans to ease up, and has been ruthless in targeting civilian energy infrastructure, lending a degree of misery to Ukraine’s cold winter.

The timing appeared ripe for Zelensky to make a dramatic gesture like slipping out of Ukraine for the first time since the invasion began. For Biden, the visit presents an opportunity to reinforce his convictions for supporting Ukraine, even as the war plods on.

The new, $1.8 billion package Biden unveiled includes a Patriot surface-to-air missile system, which has been a longstanding request of Ukraine’s to fend of Russian air attacks. CNN was first to report the US was expected to send the Patriot systems to Ukraine.

A senior administration official said US troops would train Ukrainians to use the system in a third country. CNN has previously reported the training would occur at a US Army base in Grafenwoehr, Germany.

The system is widely considered one of the most capable long-range weapons to defend airspace against incoming ballistic and cruise missiles, as well as some aircraft. Because of its long-range and high-altitude capability, it can potentially shoot down Russian missiles and aircraft far from their intended targets inside Ukraine.

Russia has warned on unspecific “consequences” if the US provided Ukraine with Patriot missiles, viewing the shipments as further US engagement in the war. The official was clear, however, that Biden remained steadfast in keeping the United States out of direct conflict with Russia, despite the enhanced security assistance.

“The President has been very clear that we are going to lean forward and be robust in our support for Ukraine on the military, economic, energy and humanitarian fronts, but we are not seeking to engage in a direct war with Russia. And nothing about that will change tomorrow,” the official said.