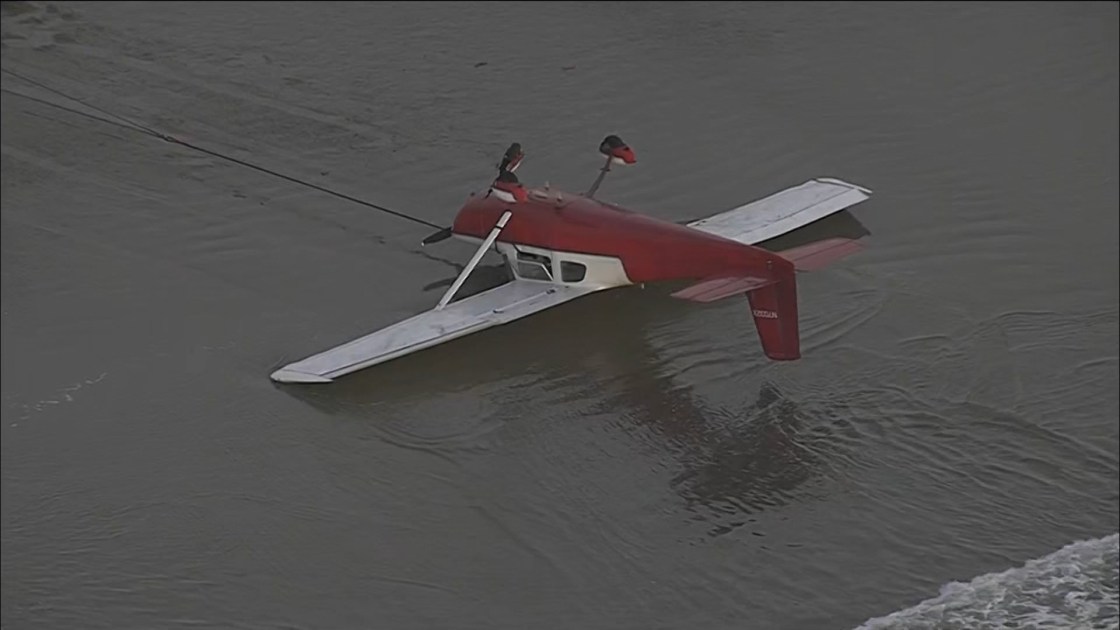 The Cessna 150’s two occupants were freed and taken by paramedics to a hospital, according to Nulty.

The aircraft departed Santa Monica Airport shortly before the accident when it reportedly attempted a landing on the hardpack sand, Nulty said.

The plane flipped over after landing, according to FAA spokesman Ian Gregor.

“We have a report that they did report some sort of emergency to the tower at Santa Monica Airport but we’re still gathering the details,” he said.

Josh Feenberg and a friend were on the beach when the plane crashed.

“My friend saw a plane flying really low and was really confused,” Feenberg told ABC 7. “Then we saw it fly down there and we thought it would be a smooth landing but it hit the water and flipped over. It was pretty scary.”

The pilot’s condition was not available.

The National Transportation Safety Board is leading the investigation, Nulty said.

“Sadly, former SM mayor and judge Rex Minter was the passenger in the plane,” Davis tweeted at 9:42 p.m. Thursday. “He has passed away. I have spoken with his family and relayed the City’s condolences to them.”

Minter, who was a passenger in the plane, was born in 1927, elected to the Santa Monica City Council in 1955 and was mayor from 1963-67. Minter was also city attorney for Arcadia and a Los Angeles County Superior Court commissioner.

Minter was appointed as a Santa Monica Municipal Court judge by Gov. Ronald  Reagan in 1971 and elevated to the Superior Court in upon court unification in 2000, retiring the following year.

Minter met his wife Doris while they both attended Santa Monica High School.

Minter served in the U.S. Marine Corps and was an avid aviator.

His wife is a member of the Ninety-Nines, the international organization of women pilots.

Flags in front of City Hall will be lowered to half-staff and a City Council meeting in 2023 will be adjourned in honor of Minter’s service.