Deputy Fatally Shot During Confrontation with Felon in Jurupa Valley 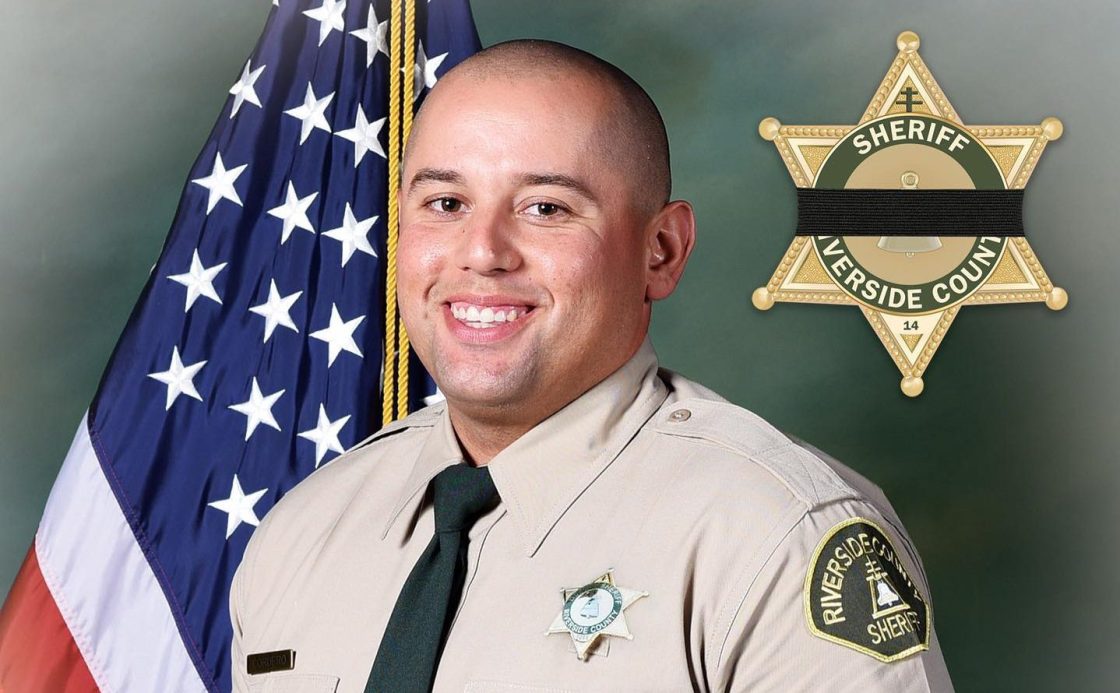 (CNS) – The man accused of shooting a Riverside County sheriff’s deputy is dead Friday after a confrontation with law enforcement officers and a lengthy chase that ended in Norco, leading to a freeway closure.

Deputy Isaiah Cordero, 32, was fatally shot by a convicted felon during a traffic stop in Jurupa Valley on Thursday shortly before 2 p.m. in the 3900 block of Golden West Avenue, near Rathke Drive, less than a block from Rustic Lane Elementary School, and the gunman was killed by police officers two hours later, according to the Riverside County Sheriff’s Department.

“He certainly embodied our motto, `Service Above Self,”‘ Sheriff Chad Bianco said about Cordero during a briefing at sheriff’s headquarters in downtown Riverside Thursday night. “He was a jokester around the station, and all of our deputies considered him to be a little brother.”

Gov. Gavin Newsom has ordered state flags to be flown at half-staff in Cordero’s honor.

“Jennifer and I extend our deepest sympathies to Deputy Isaiah Cordero’s family, friends and colleagues during this difficult time. He served his community selflessly, and with dedication and courage. We owe him our respect, gratitude, and will remember his sacrifice.”

The Riverside Sheriff’s Association also shared its condolences for Cordero.

“We are devastated by the grief of losing Deputy Isaiah Cordero, a deputy who was a ray of sunshine in the Riverside Sheriff’s Department, a person who was dedicated to protecting others,” the statement said. “Once again, we face a tragic reminder of the selflessness and unwavering courage required of peace officers and their families.”

Bianco said Cordero, a motorcycle patrolman, stopped 44-year-old William Shae McKay of San Bernardino, a three-strike felon, for reasons still under investigation but possibly related to irregularities with the black pickup he was driving.

“As (Cordero) approached the vehicle, the suspect produced a (handgun) and shot the deputy,” the sheriff told reporters. “A community member witnessed it and called 911. Residents tried to help the deputy until paramedics arrived.”

Although life-saving measures were attempted and Cordero was taken to Riverside Community Hospital, Bianco said the gunshot wound killed the deputy on the spot.

According to Bianco, because of the witness, responding sheriff’s deputies were able to quickly broadcast a region-wide alert, providing key details regarding the vehicle and driver.

“Law enforcement agencies in San Bernardino and Riverside counties began a massive manhunt,” he said. “We were looking for that vehicle and located it very quickly. The suspect was located in San Bernardino, and there was a pursuit, which came back into Riverside County.”

The county’s top lawman said that during the multi-agency chase, a spike strip was deployed on the Pomona (60) Freeway at Valley Way, and McKay ran over it, blowing out the pickup’s two rear tires. However, the vehicle remained drivable, and the felon continued on, ultimately turning south on Interstate 15 in Eastvale, with a phalanx of law enforcement officers closely behind.

The chase came to an end on southbound I-15 at Fourth Street in Norco.

“The vehicle became disabled, and he had an accident,” Bianco said. “The (rear) tires came off, and eventually that caused the axle to fail. He shot across the freeway and (crashed) …. The suspect started shooting at deputies, which prompted them to shoot back.”

McKay was fatally wounded during the exchange, Bianco said. No other deputies were injured.

San Bernardino County Superior Court documents show that the judge was Cara D. Hutson, out of the Rancho Cucamonga branch. She was re-elected to the bench in June and has been a judicial officer since 2007.

Assemblyman Bill Essayli, R-Corona, vowed to pursue changes to state laws that may have indirectly led to Cordero’s death.

“Words cannot describe my outrage following today’s tragic deadly shooting of Riverside County Sheriff’s Deputy Isaiah Cordero,” Essayli said. “We must do more than mourn; we must take an honest look at how our laws, and their enforcement, led to today’s tragedy. What makes this line of duty death beyond tragic is that it was completely avoidable: the perpetrator was on his third felony strike as of 2021, but instead of 25 years-to-life in prison, a San Bernardino judge had the discretion to give this career criminal a reduced bail and released him on our streets.

“I am committed to fixing our laws so violent career criminals like the one who murdered Deputy Cordero are not allowed back on our streets to terrorize our communities.”

Bianco extended his “sincerest condolences” to Cordero’s mother, father and stepbrother, by whom he is survived. The fallen deputy was not married but was in a relationship, the sheriff said.

“There’s nothing worse than losing a life in a senseless manner while serving the community,” Bianco said. “Anyone who targets law enforcement in our county will be dealt with, by swift action.”

Funeral arrangements for Cordero were pending.

Southbound I-15 was completely shut down at Sixth Street in Norco, where motorists were detoured, while the scene where McKay was killed was processed. A miles-long traffic jam ensued, stretching all the way back into San Bernardino.

Cordero’s remains were borne from Riverside Community Hospital south to the coroner’s bureau in Perris for an official autopsy and cause of death ruling.

The transfer was solemnized by an extensive procession of law enforcement including sheriff’s deputies, CHP officers, police from the Riverside, Menifee, and Corona departments, as well as personnel from agencies outside Riverside County.

County fire engines and trucks parked on overpasses, and crews saluted as the hearse carrying the fallen deputy headed south along Interstate 215. The CHP ran traffic breaks to clear motorists out of the way of the procession, which coursed along the freeway and surface streets for an hour as part of the tribute.

Rustic Lane Elementary School is on winter break, and no classes were in session at the time of the shooting.