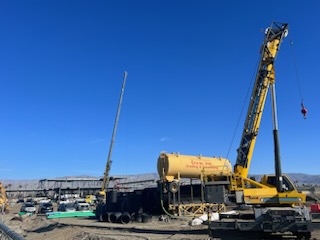 (CNS) – The city of Indio hosted a public beam-signing ceremony Friday to celebrate a milestone in construction on its new $50 million Public Safety Campus.

The 430,000-square-foot facility will be located at 46800 Jackson St. and is expected to be operational by 2024, according to a statement from the city.

City officials said that the $50 million campus will feature three buildings to accommodate a dispatch center, fire station headquarters and administrative offices for the police and fire departments.

The ceremony was open to the public, and Indio residents joined in signing the beam, according to city officials.