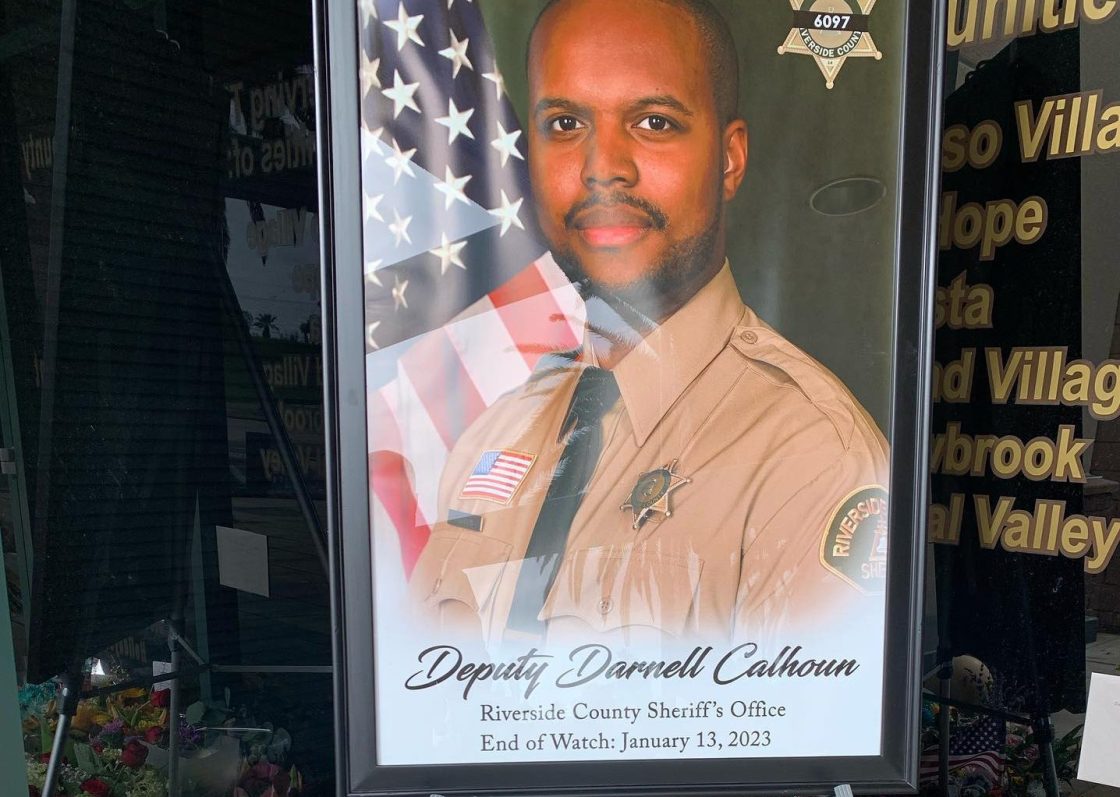 (CNS) – A public viewing is scheduled Friday in Murrieta for those wishing to honor slain Riverside County sheriff’s Deputy Darnell Calhoun, whose funeral services will follow on Saturday in Rancho Cucamonga.

According to the Riverside County Sheriff’s Department, the Murrieta Valley Funeral Home, located at 24651 Washington Ave., will provide the viewing of Calhoun’s casket from 4 p.m. to 7 p.m. Friday.

On Saturday, the fallen lawman’s remains will be borne to Abundant Living Family Church, 10900 Civic Center Drive, where a memorial service is scheduled between 10 a.m. and noon. Internment will follow the eulogies, and that service will be private.

The public is invited to show support ahead of the memorial by lining the route on which the procession from the funeral home to the Rancho Cucamonga church will take. It is as follows:

A candlelight vigil was held for Calhoun on Tuesday outside the sheriff’s Lake Elsinore station, where close to 150 people gathered to remember the 30-year-old deputy, including Sheriff Chad Bianco.

“It takes a special kind of person to be able to come to work everyday, knowing that you could sacrifice your life for someone else and leave your family behind,” Bianco said. “Darnell was that kind of man, who came to work to protect people.”

Lake Elsinore Mayor Natasha Johnson said Calhoun’s “sacrifice reminds us of the ultimate price our law enforcement officers are willing to pay to keep our families and our communities safe.”

“His service and dedication will never be forgotten,” she said.

Earlier this week, the fallen lawman’s family released a statement thanking residents and others for their “outpouring of love and support.”

“While we are heartbroken, we also celebrate the gift of Darnell — the husband, father, son, brother and deputy,” according to the family statement. “His life, though cut short, is a blessing. Our faith in Jesus will carry us through this, and we know we will be reunited with Darnell once again.”

Calhoun was allegedly gunned down Friday by 42-year-old Jesse Navarro of Lake Elsinore.

The deputy, who left behind a pregnant wife and two young sons, died after he was rushed to Inland Valley Medical Center in Wildomar, where the suspect was also taken and remains in critical condition after he was shot by a deputy backing up Calhoun.

A “Help A Hero” fundraiser was immediately established for the slain lawman. As of Thursday morning, $223,989 in donations had been made on behalf of Calhoun’s family. The fundraiser link is at https://helpahero.com/campaign/deputy-darnell-calhoun.

“He was a husband, a father of two young boys — ages 2 and 4 — and a third baby boy on the way,” according to the Riverside County Deputy Sheriff Relief Foundation, which initiated the online fundraiser. “He will be remembered as a son, a brother, a grandson, a nephew, a cousin, a son-in-law, a brother-in-law and a loyal friend.”

Bianco said Calhoun was fatally shot about 4:20 p.m. Friday in the 18000 block of Hilldale Lane, near Grand Avenue, when he approached a residence from which a 911 call had been placed indicating there was a domestic disturbance.

Bianco said Calhoun was hit when Navarro allegedly opened fire from the residence.

“The second deputy on the scene found Deputy Calhoun wounded in the street,” Bianco said last week. “A gunfight ensued with the suspect, who was shot. The suspect was treated at the scene and transported to the hospital.”

Background information on Navarro was unavailable.

Calhoun was assigned to the Lake Elsinore station after he laterally transferred from the San Diego Police Department just under one year ago.

The San Diego Police Department posted a message Friday night saying personnel were “devastated to learn of the passing of Deputy Darnell Calhoun, an SDPD officer until 2022.”

“Our thoughts and prayers are with his family, friends and colleagues in SDPD and the Riverside County Sheriff’s Office.”

Exactly one week prior to Calhoun’s slaying, Deputy Isaiah Albert Cordero was laid to rest.

The 32-year-old motorcycle deputy was shot to death on the afternoon of Dec. 29 by a convicted felon during a traffic stop in Jurupa Valley. The man was killed two hours later during a gun battle with deputies attempting to arrest him after a lengthy pursuit that ended on southbound Interstate 15 in Norco.

Cordero’s had been the first deputy line-of-duty death in Riverside County in 15 years.