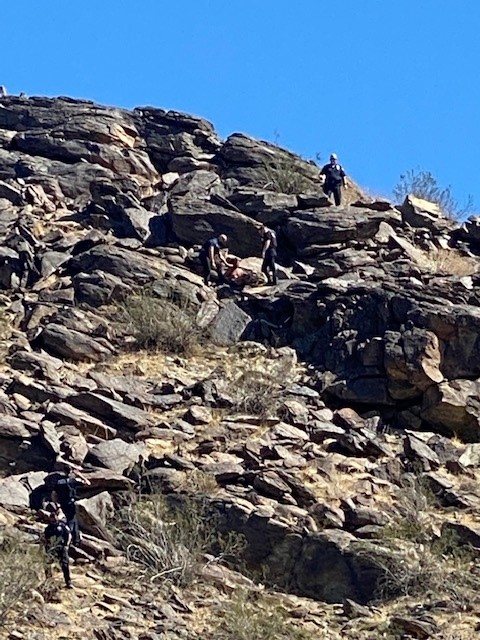 (CNS) – A 31-year-old man who allegedly led police on a lengthy foot pursuit that traversed a grocery store roof and a hiking trail in Palm Springs re-entered not guilty pleas Thursday.

Julian Baez is charged with three felony counts, one each of burglary, assault with a deadly weapon on a police officer and resisting or deterring an officer, according to court records. Baez is additionally charged two misdemeanor counts of willfully resisting, delaying and obstructing a police officer.

He initially entered not guilty pleas at his arraignment Sept. 28, 2022. At the end of a preliminary hearing at the Larson Justice Center in Indio Dec. 22, 2022, Riverside County Superior Court Judge John J. Ryan ruled that there was sufficient evidence to warrant a trial for Baez on all charges.

He re-entered not guilty pleas for all charges Thursday morning at the Larson Justice Center in Indio. He’s due back in court Feb. 21 for a trial- readiness conference.

During the preliminary hearing, Officer Danny Buduan from the Palm Springs Police Department testified that as Baez allegedly fled from officers and scaled a mountain into a hiking trail, he “started throwing large-sized rocks as they closed a distance on him,” but that no officers were struck in the process.

Toward the end of the preliminary hearing, Baez’s defense attorney, Melanie Roe asked the judge to reduce two felony charges to misdemeanors given that Baez didn’t hurt or intend to hurt any of the officers as he allegedly fled from them on Sept. 26, 2022. The judge denied the request.

At 11:30 a.m. on Sept. 26, 2022, a homeowner reported a possible burglary after receiving a security camera alert of a man going in and out of a vacant rental property in the 2100 block of Bob O Link Lane, according to the Palm Springs Police Department.

When officers arrived, they saw a man and woman running away, police said. Sandra Lee Pritchard, 22, was arrested in the backyard of the property, but Baez allegedly ran toward the Vons store at the Rimrock Shopping Center at 4733 E. Palm Canyon Drive.

Baez allegedly climbed to the roof of the grocery store, and nearby construction workers used a lift to help officers get on the roof to continue the chase, police said.

Customers were evacuated from the store as officers searched crawl spaces and the attic, but Baez eluded the search and made his way on foot toward a hillside trail and RV park, according to police. A California Highway Patrol fixed-wing aircraft and the Riverside County sheriff’s helicopter crew helped to locate Baez as he tried to climb a steep hill.

He was subsequently arrested at around 2:40 p.m. after allegedly attempting to hide in a crevice.

He was checked at a hospital and was booked around 11 p.m. the same day into the John J. Benoit Detention Center in Indio, where he remains on $500,000 bail.