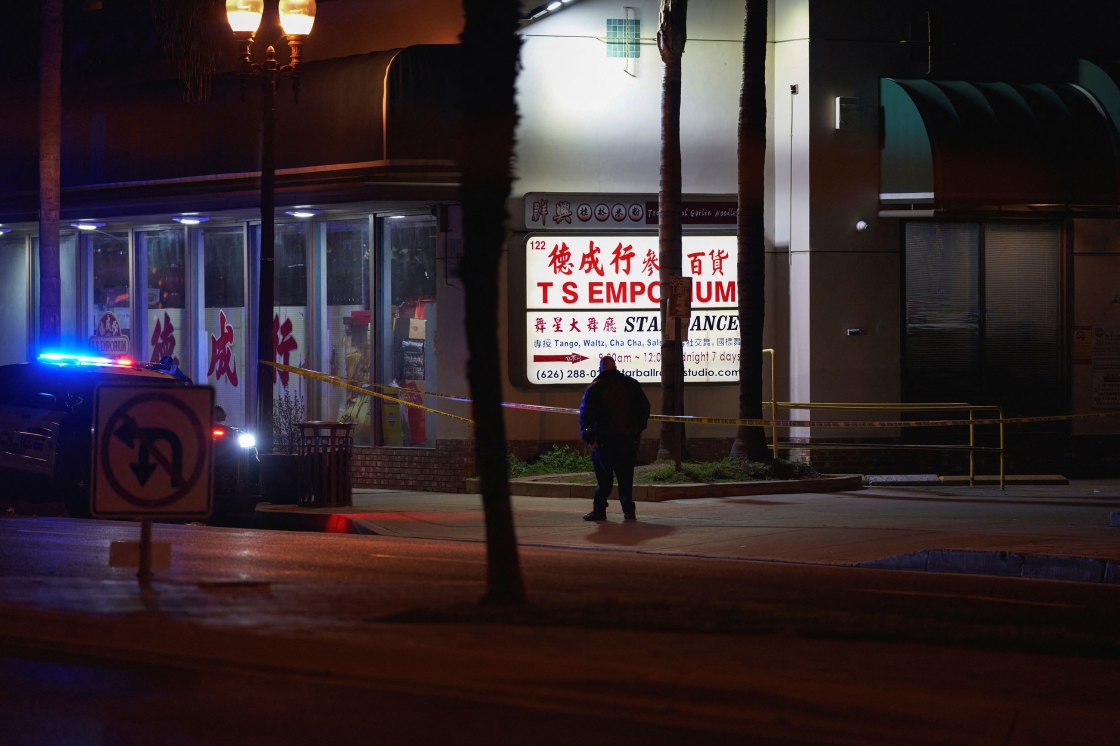 MONTEREY PARK (CNS) – A possible suspect in a mass shooting in which
10 people were killed and another 10 wounded at a ballroom dance studio in
Monterey Park was found dead inside a white van at a strip mall in Torrance
today after a standoff with law enforcement.

That suspect was identified at a news conference this evening as 72-
year-old Huu Can Tran.

The mass shooting attack occurred at 10:22 p.m. Saturday at the Star
Dance Studio in the 100 block of West Garvey Avenue, Homicide Bureau Capt.
Andrew Meyer of the Los Angeles County Sheriff’s Department told reporters at
the scene during an early morning news conference.

About 17 minutes after the Monterey Park shooting, a man walked into
the Lai Lai Ballroom & Studio in the 100 block of South Garfield Avenue in
neighboring Alhambra with a gun, but some people wrestled the weapon away from
him and he fled, Luna said.

Luna added that authorities were searching for a white cargo van the
suspect might have used to escape.
Torrance police later cornered a white van at a parking lot on the
south side of Sepulveda Boulevard, just west of Hawthorne Boulevard, at a strip
mall not far from Del Amo Fashion Center. Police maneuvered two SWAT vehicles
on either end of the van, butting up against it, while a large number of police
vehicles stood by for support.

All lanes at the intersection of Hawthorne and Sepulveda were closed
for the police investigation.

A law enforcement source told the Los Angeles Times that shots were
fired, but it was not clear if anyone was hit. A bomb squad truck was sent to
the strip mall, which contains a Tokyo Central outlet and a Daiso store. A
sheriff’s department helicopter also landed on Hawthorne Boulevard and was
standing by.

Authorities entered the van shortly before 1 p.m. and found a man in
the driver’s seat dead from one or more gunshot wounds. It was not immediately
clear if the wounds were self-inflicted or if the man was shot by police or
sheriff’s personnel.

Luna said at a news briefing later Sunday that authorities did not
know for sure whether the person in the van was connected to the two earlier
crimes. He said authorities had the suspect’s name, but were not releasing it
yet because they believe it could hamper efforts to take him into custody.

The motive for Saturday’s attack has not been released, but the
shooting took place near a large celebration for the Chinese New Year. The city
of Monterey Park canceled Sunday’s planned second day of the two-day
celebration, but other holiday events were still planned throughout Southern
California. Luna said at a Sunday morning news conference that he would be
attending a similar event in a few hours, and encouraged the public to continue
celebrating the holiday.

“At this time, we can confirm that our LAC+USC Medical Center has
received four of the victims of the Monterey Park Mass Shooting … Due to
Federal HIPAA patient privacy laws, we are unable to share details on our
patients’ status. However, we want to assure the families of those at our
LAC+USC Medical Center that our medical teams are doing everything possible to
care for their loved ones.

“The President has been briefed by the Homeland Security Advisor on
the mass shooting in Monterey Park,” Jean-Pierre tweeted. “He directed her to
make sure that the FBI is providing full support to local authorities, and to
update him regularly today as more details are known.

Biden later tweeted the following statement: “Jill and I are praying
for those killed and injured in last night’s deadly mass shooting in Monterey
Park. I’m monitoring this situation closely as it develops, and urge the
community to follow guidance from local officials and law enforcement in the
hours ahead.”
Gov. Gavin Newsom also shared his thoughts on Twitter.

“Monterey Park should have had a night of joyful celebration of the
Lunar New Year,” Newsom tweeted. “Instead, they were the victims of a
horrific and heartless act of gun violence. Our hearts mourn as we learn more
about the devastating acts of last night. We are monitoring the situation
closely.”