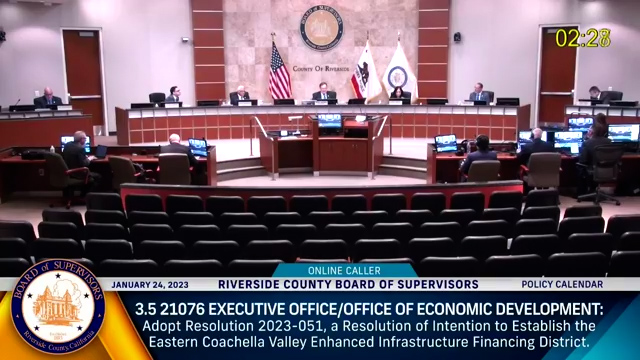 (CNS) – The Board of Supervisors Tuesday tentatively approved plans for the establishment of a special tax district to pay for future projects intended to improve transportation, wastewater discharge and other infrastructure in the Eastern Coachella Valley, including part of the Salton Sea.

The board voted unanimously to initiate the process of implementing an enhanced infrastructure financing district, or EIFD, covering the area encompassing the northern half of the Salton Sea, as well as surrounding communities. including Mecca, North Shore and Oasis.

The EIFD would supplant one previously approved more than four years ago that exclusively focused on the Salton Sea and its nearest environs.

EIFDs were authorized under Senate Bill 628 in 2014 and permit bond sales to finance construction of private and public projects. Districts rely on “tax increment” to pay off the bonds issued in support of them. Tax increment is generated by projects within specified locations that increase property values.

“Establishment of the Eastern Coachella Valley Enhanced Infrastructure Financing District will not result in any new taxes or fees to the area’s property owners,” according to an Executive Office statement posted to the board’s agenda. “Increase in property value from resale and development of properties will be used for future infrastructure projects with community- wide and economic benefits.”

Supervisor Manuel Perez, in whose Fourth District the EIFD would be situated, pointed out that the funding generated would provide revenue streams for projects that secure “clean drinking water, (new) sewers, side walks and roads — in an area that very much needs it.”

Perez advocated and won support for the Salton Sea Enhanced Infrastructure Financing District in 2018. That district was exclusively focused on generating funding for fortifications to preserve and protect Riverside County’s segment of the receding 360-square-mile lake.

According to officials, further analysis showed a need to expand the district for the benefit of multiple neighboring communities, not just the sea and its shoreline.

The new district will not require voter approval, unless 25% of property owners within its boundaries lodge a formal protest to its establishment.

Property owners will be receiving notices regarding the proposed EIFD in the coming months.

A public meeting on the district is tentatively slated for 9:30 a.m. Aug. 29 at the County Administrative Center in Riverside.