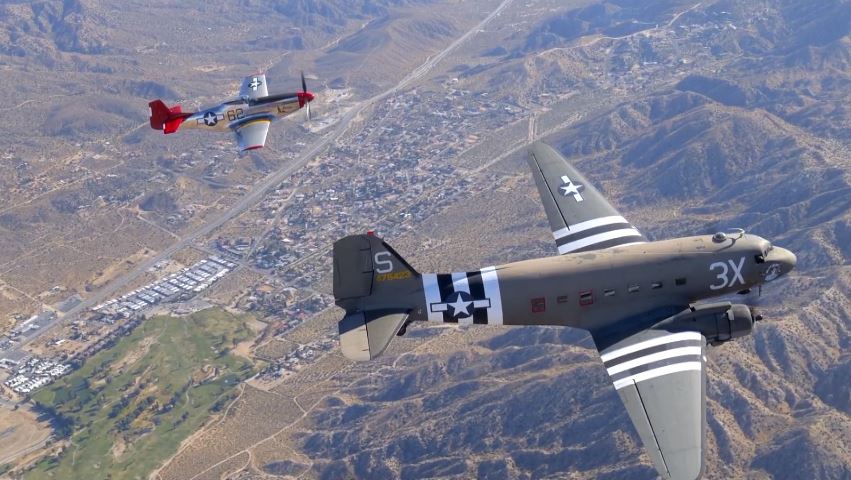 The Palm Springs Air Museum is hosting their annual flyover on Saturday, September 11th to remember the tragedy that rocked the United States twenty years ago.

A total of 27 local city and county fire stations in the Coachella Valley and high desert, including the 29 Palms Marine Base will be recognized during this year’s flight.

For the Coachella Valley, this year hits a little deeper. The recent passing of Coporal Hunter Lopez and the recent withdrawal from Afghanistan; makes this weekends tribute harder to process.

According to the Air Museum, Gold Star families will be recognized by a flag in the C-47 plane.

Tom Nightingale, volunteer pilot, says he’s appreciative that he gets to pay his respects to those who died that day and the first responders from around the country coming together to help.

“It means a lot to me to be able to commemorate you know the first responders that were just so fabulous at helping at that time. You remember that event and people from all of the United States traveled there to be helpful.”

World War II planes will be high in the skies at 9:45 a.m. for the flyover this weekend; a tribute that’s reserved for the highest honors in military.

“We’re a military aviation museum. In a military aviation setting would be the highest honors you can get is a flyover. In this case we think it’s a fitting tribute to all those folks who are first responders that didn’t hesitate to run into those buildings while they were burning. Then all the folks who have fought in the war on terror.”

The Air museum participates in many flyovers throughout the year; from July 4th, Memorial Day and 9/11.

Pilot Nightingale reminds us that service members should be remembered while they’re taking flight. Especially WWII personnel, a generation that’s dying off.

“So appreciate the great generation of what they did for us WWII; to keep our country safe. It’s just been a way that I’ve been able to connect to a lot of that generation.”